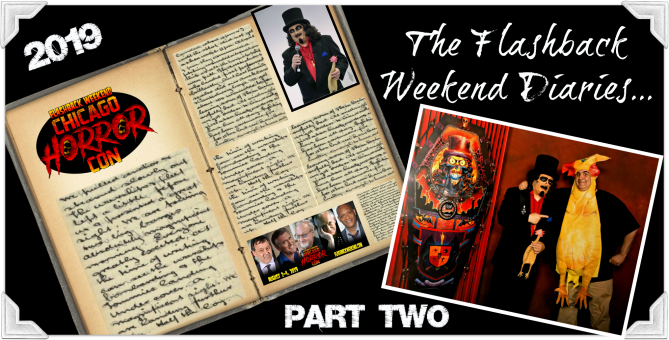 5:30 PM, Friday, August 2, 2019: I walk outside the hotel just as the Svengoolie crew parks. Sven’s in the passenger seat with his producer and assistant, Jim Roche driving. In the back is his director, Chris Faulkner, and “hit the theme for us” Chas Ailing. As soon as they come out I hand them their passes. The last to exit is the host, himself, and I jokingly hold up his lanyard like a Hawaiian lei, prepared to put it over his head. “Well, if you’re gonna kiss him, make sure you do it on his cheek so you don’t mess up his makeup,” quips Jim. When it comes to comedy, these folks are “on” whether the camera’s rolling or not.

We walk inside and Don Johnston is standing ready to welcome them to the hotel. He escorts us to the elevator while people point at the man in makeup saying things like, “Holy crap! It’s Svengoolie!” and “Is that really Sven!?” Inside the elevator, a woman is wearing a Svengoolie shirt and Jim teases her for having “terrible taste in clothes.” She’s clearly starstruck and doesn’t utter a word; just stands there grinning until the elevator finally reaches her floor. As she exits, Sven thanks her for buying his shirt.

Once inside our room, the crew unloads their equipment and Svengoolie takes a seat. When he crosses one of his legs over the other I notice he’s wearing rubber chicken socks. Talk about accessorizing! 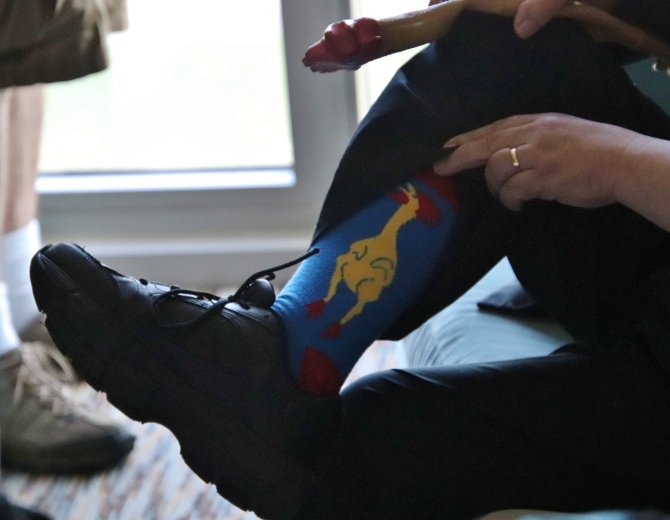 We just settle in when there’s a knock at the door and Jim invites WGN Radio personality, Nick Digilio, inside. Nick’s a personal friend of Svengoolie who often has him as a guest star on his late-night show. I’ve listened to many podcasts and radio shows featuring Rich Koz in my day, but my favorites are the ones with Digilio. The man knows Sven well and doesn’t ask the same basic questions I’ve heard answered over and over. Plus, he’s a film buff and Flashback Weekend regular who introduces the host each year at the costume contest. Tonight, he’s moderating “An Evening with Rich Koz- Celebrating 40 Years of Svengoolie” and uses this brief window of opportunity to work out last minute details.

6:25 PM: We all head down for Svengoolie’s Friday Photo Op slated for 6:45. Once we reach the designated area, the crew gets a warm greeting from Kitsie Duncan from Celeb Photo Ops. Despite having contact with countless celebrities, she adores Svengoolie and it shows! 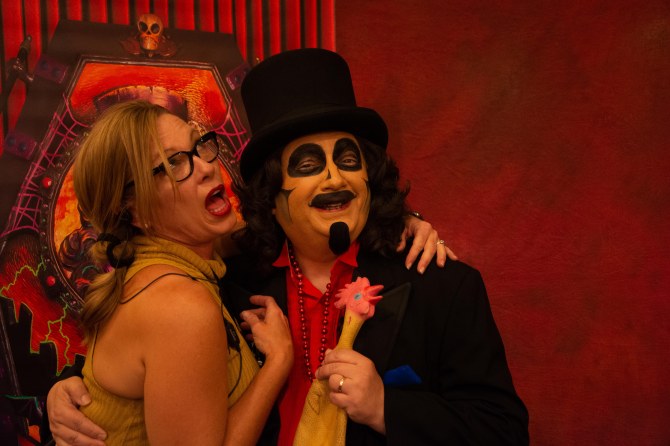 It’s here I split company with the crew and find myself a place in line. Although I’ve got dozens of photos with me and Svengoolie, I really wanted to have a professional taken. In honor of the occasion, I snagged myself a rubber chicken costume I found online. Prior to Sven’s arrival, I pulled it out of the package in the hotel room and noticed it was a size adult medium. The last time I was able to fit into that size was sometime during the Reagan Administration. With no pair of scissors on hand, I ended up using my keys to rip through the material so I could just put it over my head and let the costume hang in front.

The room for photos was sweltering and I was sweating so badly you’d of thought I was melting. Not wanting to add any more layers, I decided to wait till the last minute before putting the chicken costume on. The Crowne Plaza in Rosemont is a beautiful hotel with comfortable rooms but the air-conditioning on the main level sucks! I’d written it off at G-FEST on account of how crowded it was and the fact it was like 95 degrees outside. But today there weren’t nearly as many people and it outdoor temps were in the ‘70s. I wondered how Svengoolie was holding up in that suit of his.

6:45 PM: Thankfully, once the line started moving, it moved fast.  When it’s my turn, I quickly put the chicken costume over my head and join Sven for the photo. Unfortunately, the top of the costume slumped over just in time for the photo with the end result a limp chicken! I considered trying it again for my Saturday Svengoolie Photo Op but decided not to risk it. My original plan was to dump this costume in a hotel garbage can but I’m keeping it for a future Svengoolie appearance (hopefully the Berwyn Route 66 car show on the 24th). 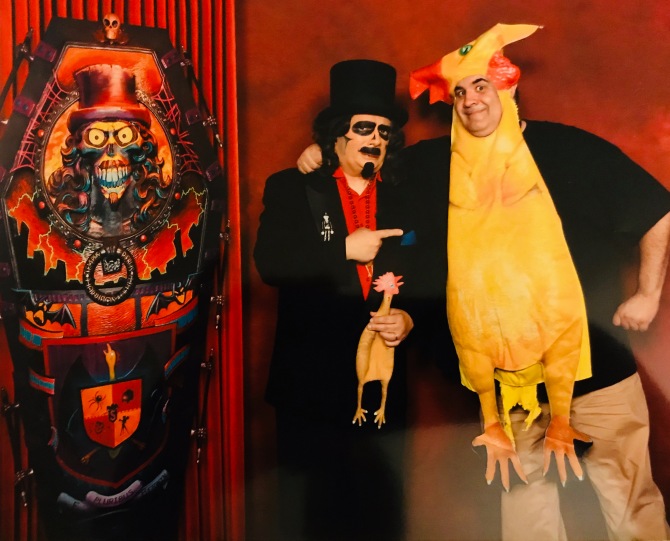 When I showed this photo to my kids after the event my son, Luke, cracked up. Not because his dad was wearing a chicken costume but because the way the ripped lining hung down from it made it look like my rubber chicken was giving birth to another one! At second glance, I have to say he’s right.

I stayed behind the scenes for the remainder of the fan photos. There weren’t a whole lot of costumed fans outside of myself, though one guy sported a pretty cool sleeve tattoo with Svengoolie on it.

After it was over, Kitsie was really cool and allowed us to stay and take pictures. This year, the crew brought along a canvas replica of Sven’s coffin to enhance the photos. Afterward, Jim wanted shots of Svengoolie and the gang in front of it which he admitted was funny considering they all work with the real one. 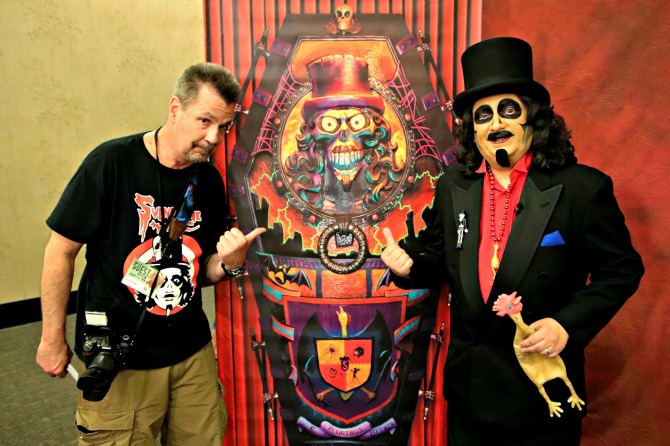 7:00 PM – 7:15 PM: Svengoolie joins Nick onstage while and I find myself a seat in the crowd next Twitter pal, Nanette. Chas sets up his camera for filming while Chris and Jim stage themselves against opposite walls. After a hearty round of applause, the room goes silent and the panel begins…

3 thoughts on “Flashback Weekend Diaries: Svengoolie vs the Limp Chicken!”