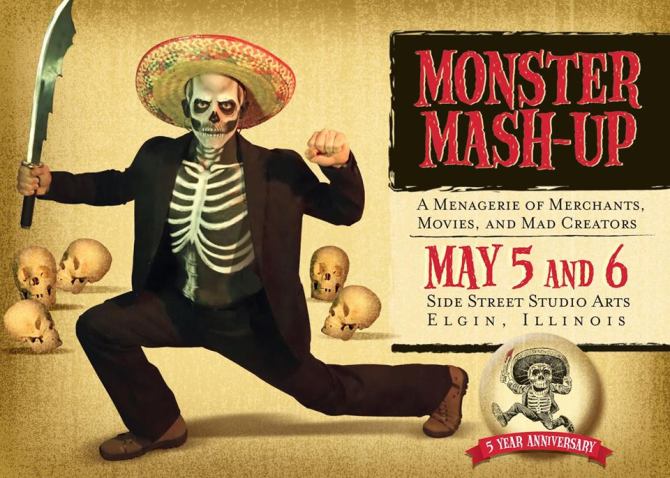 Bear with me, folks, I’ve had this story sitting in a draft folder since May and apologize for discussing the “Halfway to Halloween” mark when we’re closing in on the big day itself. Regardless, it was too cool an event to pass up and I’m pretty sure I speak for most of us when I say Halloween is a lifestyle and not just some date on the calendar anyway. So let’s get to it…

It all happened on May 5th when I returned from work and found my two youngest kids (both teens) lounging in the living room and staring at their phones. Since February, this single dad’s been working two jobs/seven days a week so the scene didn’t so much annoy me as make me feel guilty for my short-comings. I’ve always prided myself as being a “fun” dad but it seemed like this year I could do very little outside business hours, including weekends. Despite being tired and wanting to zone out in front of my own electronics,  I was determined to make this Friday night different. I’d accomplish this by taking them to Elgin, Illinois for the city’s fifth annual (and our first) Monster-Mash Up. Needless to say, when I asked them to put on their shoes and join me, they weren’t exactly jumping for joy over it. So I sat down and explained that after our seeing the premiere of Guardians of the Galaxy Vol. 2 the night before, I was reminded of how long it had been since we’d done anything fun together. Even if the event proved a bust and they wanted to glare at me all night long, at least we’d be together. Apparently my locker room speech paid off because they both got up without an argument and prepared for the hour’s journey to Elgin.

With my son, Luke (have no idea who the girl on the left is)

Anybody who’s read anything I’ve ever written about their Nightmare on Chicago Street, knows I truly love this city. They always come up with the best horror-themed events and I hate that I don’t live closer to them. If I did, I’d probably be up there every weekend watching Dr. WHO with fellow fans at their Blue Box Café, stopping by Acme Design (a.k.a. the birthplace of Svengoolie’s new coffin)to say “hello” to Elizabeth Haney, and be a regular at Side Street Studio Arts who host an annual Krampus Krawl  in December along with this event in May.

After we parked at the local garage, we followed the sound of music to a big Cinco de Mayo celebration that was underway. Elgin has a strong Latino population and I’d covered their Day of the Dead (Dia de Muertas) once HERE. We had no trouble finding Side Street Studio Arts since I’d done the aforementioned Nightmare on Chicago Street enough times to memorize their downtown’s layout. 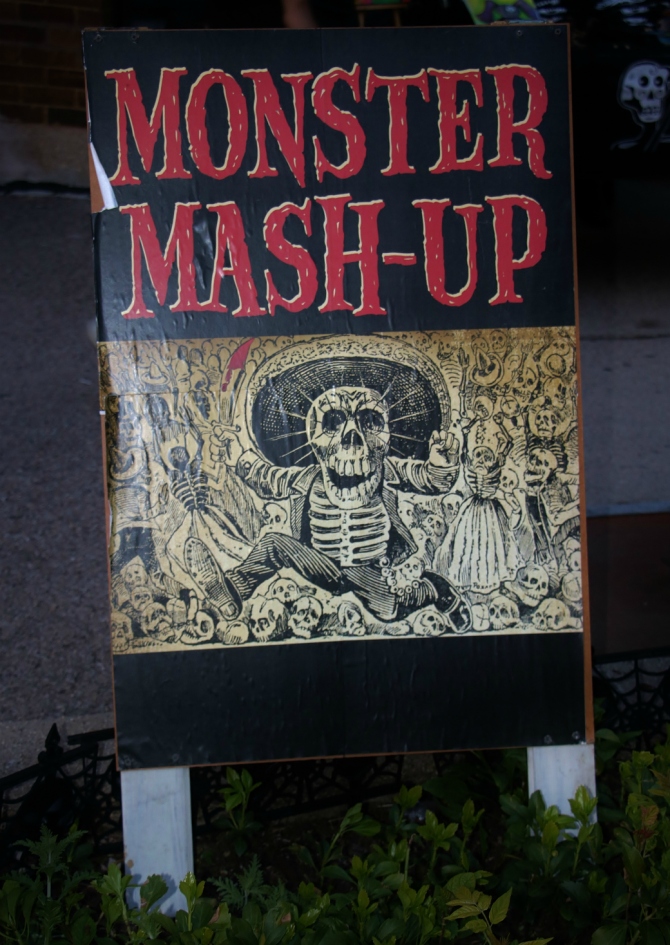 As soon as we approached the building my daughter, Jade, lit up. She loves art and has a penchant for the darker side of things (not quite sure where she gets that from) and the ghoulish homemade jewelry was right up her alley. Although most of the artisans were in the gallery, a single booth oustide featured a large array of goods and lock in my daughter;s attention.

Inside the main room (now labled as “Mr. Dark’s Gallery”) there were even more tables of homemade goods for sale. Even the artwork on the walls were available for purchase so any fellow horror fans in the Chicago area should definitely consider a stop at Side Street for their decorating needs. 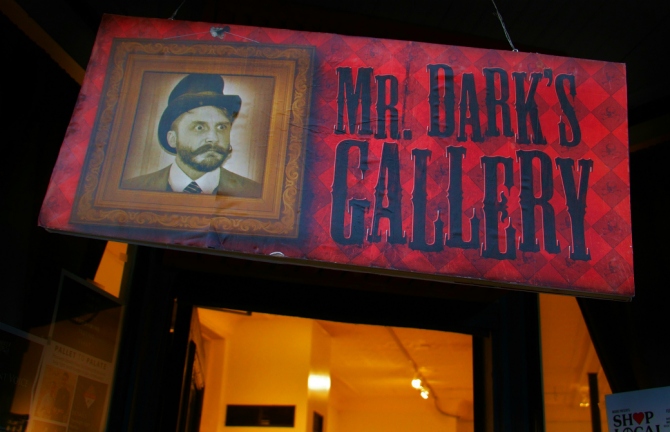 The door hadn’t even shut behind us when John LeFleur (one of the talented guys behind “8 Little Zombies”) walked up and handed me a poster. It was a nice surprise though there was a story behind it. About a week before I wrote Elizabeth about the event asking if a poster advertising this event would be for sale. Back in the ‘90s, when I had my first apartment, I remember looking for things to put on the walls and a friend telling me, “You’ll know it’s right if it calls to you.” I honestly thought she was looney tunes until I saw thier banner on Facebook and understood what she meant.  Elizabeth said there weren’t any plans to sell posters so I was genuinely touched and when John brought me a copy they made special for me. These Elgin people are truly amazing! Incidentally, pending my getting a new place, this one’s currently hanging at my work desk so I can gaze at it (a.k.a. have it “call” to me) five days a week. 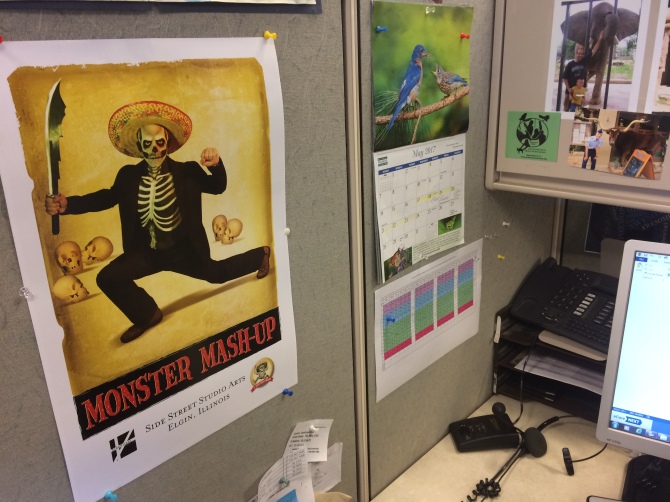 Doesn’t it just cheer the desk right up? 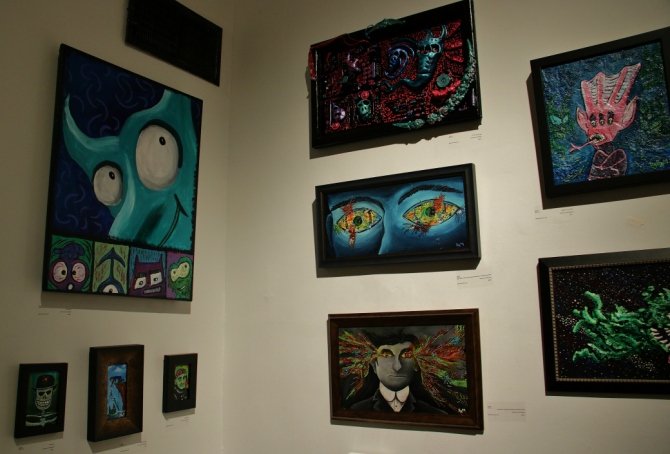 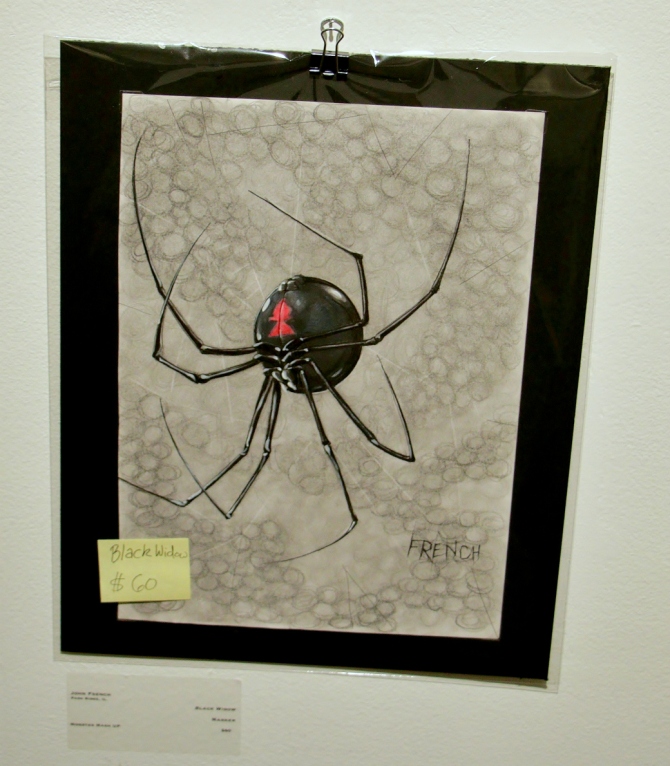 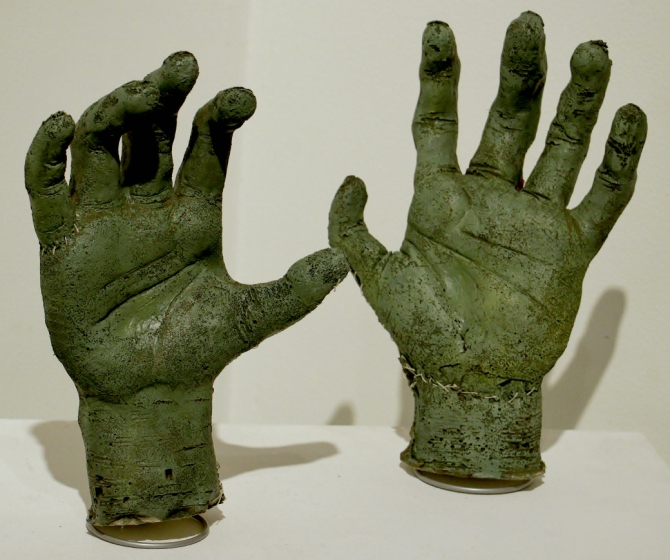 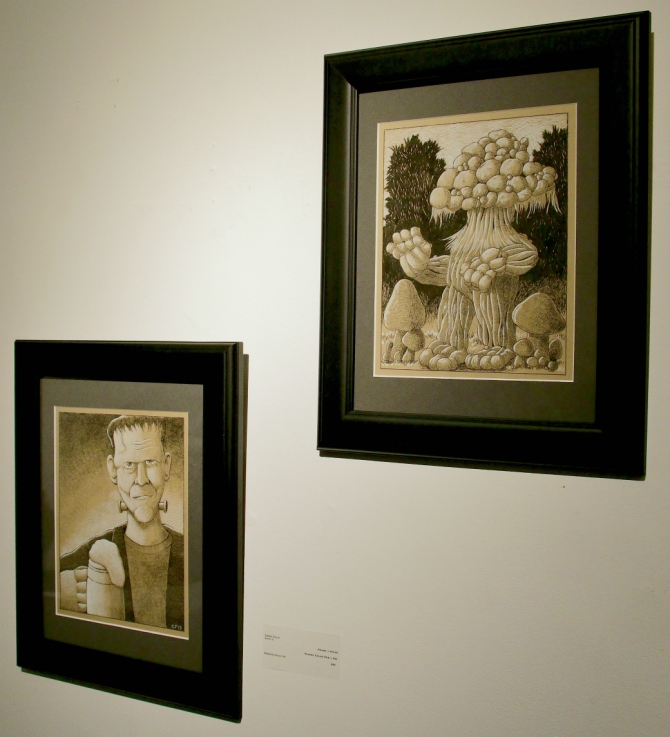 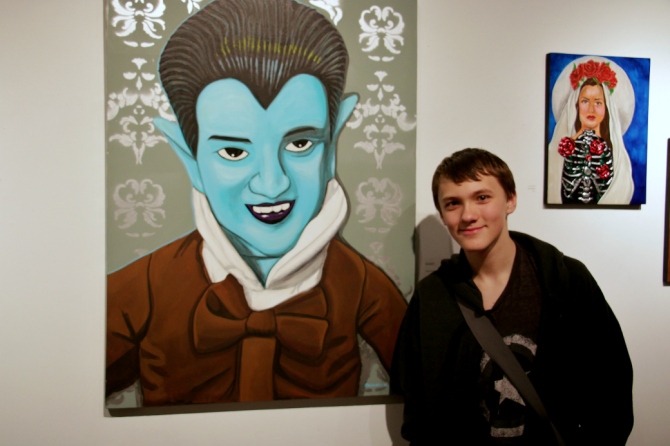 I assumed the main gallery was the bulk of the event until John called our attention to a set of stairs outside the building and leading to a second floor. “There’s a lot more stuff up there,” he advised. Just before ascending, we were welcomed by the sight of a plastic jack o’lantern. Now in October these things are a dime a dozen but in May? Well let’s just say it was like seeing a sparkling oasis after spending a long day in the desert. 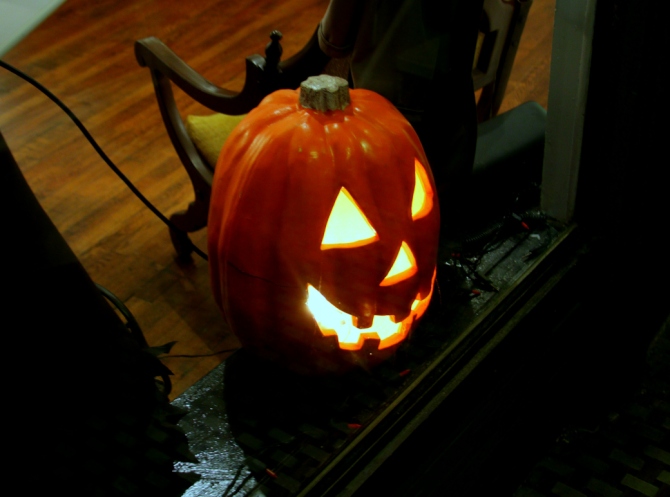 When we reached the top there was a foyer leading to another large room and a make-shift movie theater to our right. This year’s feature was the camp classic Plan 9 from Outer Space. 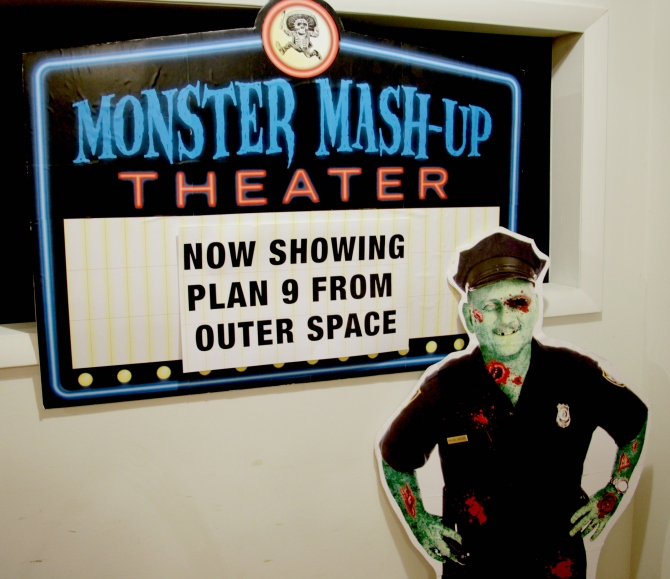 Since the movie was already underway, we proceeded to a larger room full of vendors.

The vintage stuff was fantastic but I was more interested in some hand-crafted demonic dolls I noticed when we first walked in. I ended up adopting two of them.

Before leaving, we stopped to have Monster Mash-Up T-shirts made. If you brought your own tee, then they’d silk-screen their event logo on it for free. The kids enjoyed watching them being made, in no short thanks to Fred Wimms. Wimms was very engaging to us while explaining the whole silk screening process. I was later told by my friend from Nightmare on Chicago Street, Alice Moring, that he’s the “heart and soul” of that event. 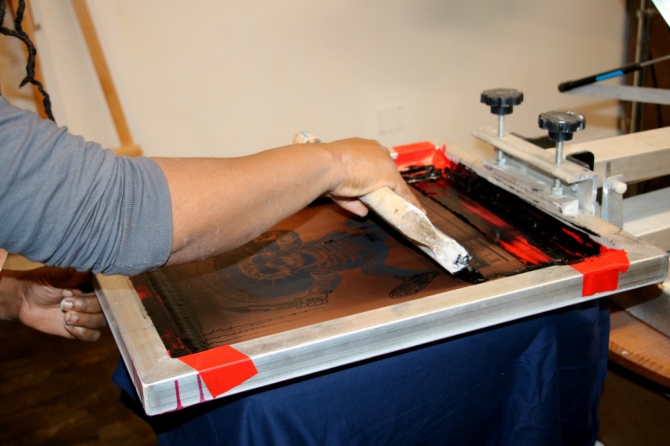 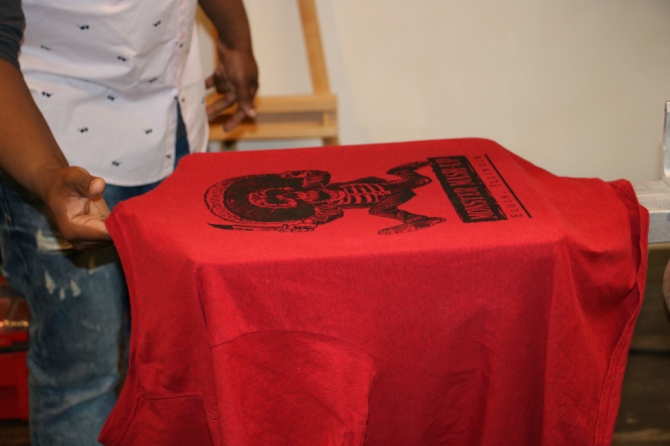 Heading back to the car, I couldn’t help but notice the kids’ moods were decisively better than when we left. They genuinely loved it and I decided to cap off the night off by taking them for “Guardians of the Galaxy” blizzards at a nearby Dairy Queen. While we were eating my son Luke said, “We should come back up and do this again next year!”

As if that was even in question.