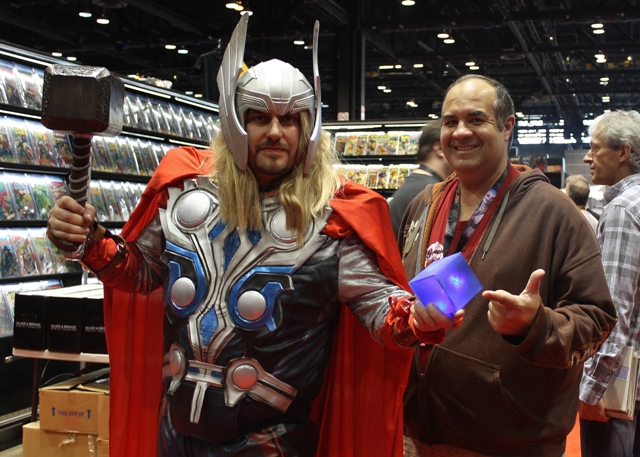 With a steady stream of new super hero movies continuously breaking box office records, nothing says “spring” like a good comic convention. Fortunately for me, one of the best of these is right here in the Windy City ala C2E2 (Chicago Comics Entertainment Expo). I’ve been going faithfully for the past couple of years and, though initially just to cover Svengoolie, it has since become so much more.

I grew up a fan of Marvel Comics and, while it’s been over twenty years since I’ve stopped collecting, have enjoyed reliving those days on the big screen along with re-reading some of my favorite stories via trade paperbacks and the hardcover omnibus books (they ain’t cheap but boy are they worth it!). I could never have imagined back in my teen years (when one had to hide their love of comic books for fear of ridicule) that my favorite super heroes would one day go on to become household names, box office gold, nor that my kids would sit at my side while asking me to recount my favorite plot-lines. Yes, “Nerd” has become the new “Cool” and not just for love of comics.

So far as fandom goes, I’m fairly well-rounded. I love comics, STAR WARS, Godzilla (even before a couple weeks when he, too, reached a new level of awesome), horror & science fiction,  Dr. WHO, and anime. Somehow Star Trek has evaded me but I’m sure if I spent a month binge watching the various series’ I’d probably end up a Trekkie too…I just seem to be wired that way. This is why C2E2 has become the perfect event as all of my interests seamlessly converge while also bringing generations together as well. 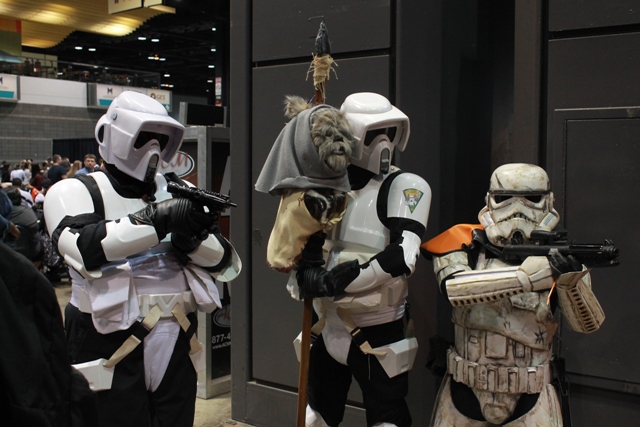 This year I was joined by my teen daughters, Leia and Jade, who requested to attend (something they rarely do with regard to my Terror Dave excursions). Leia is a fan of Dr. WHO and Anime while Jade loves horror and the super heroes of Marvel Comics (particularly Captain America and the She-Hulk). As I said, there was something here for everybody. In a related story, my sons love STAR WARS, super heroes, and Godzilla proving my geek genes have spread out evenly. 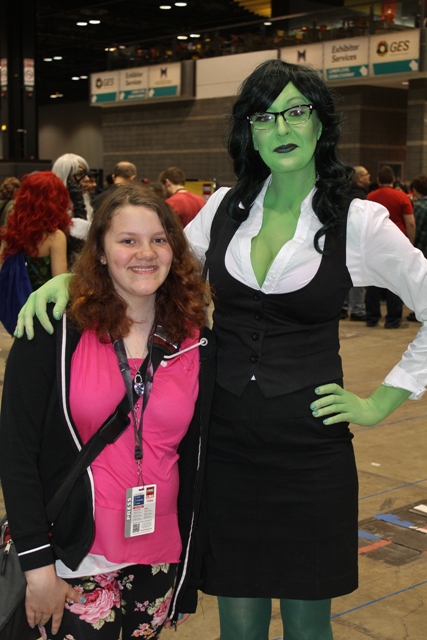 There’s a certain energy that genre fans bring to conventions and the great costumes adorned by fans illustrates what happens when enthusiasm meets creativity. Honestly, when it comes to cosplay, C2E2 is second to none. There are so many fans dressed as their favorite heroes and villains that last year I posted well over a hundred photos in several posts and I don’t think this year will be any different.

We arrived on Saturday morning and thankfully I purchased my parking ticket for the McCormick Place online the day before. This not only was a bit cheaper but the site provided directions on how to get to your respective lot. Last year I ended up walking what seemed like a mile before making it to the event but this year we were much closer. We made it inside just as the event began and saw the immense line of fans before us. At first it seemed daunting but, despite the size, this convention is well organized and, I’ll be darned, that line moved FAST.

The girls had friends who were also attending with their parents so it wasn’t long before all the adults got ditched as they went off to do their own thing. I decided to use my new found “alone time” to survey the immense hall and there was plenty to see! 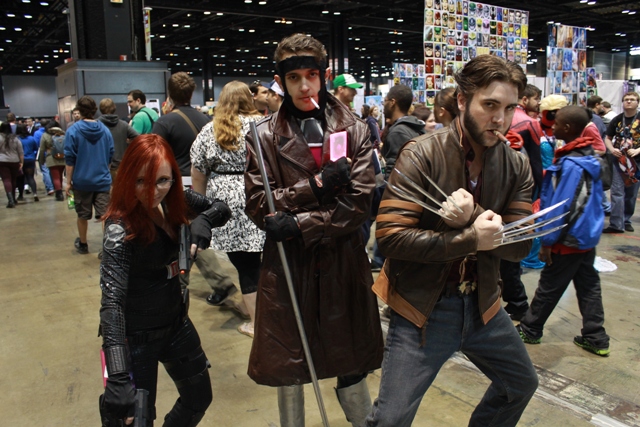 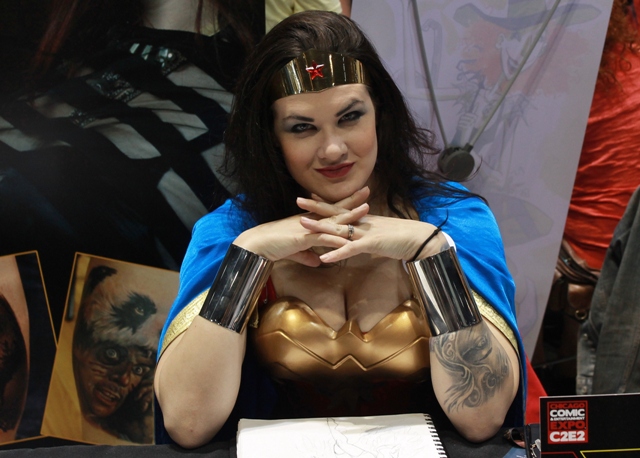 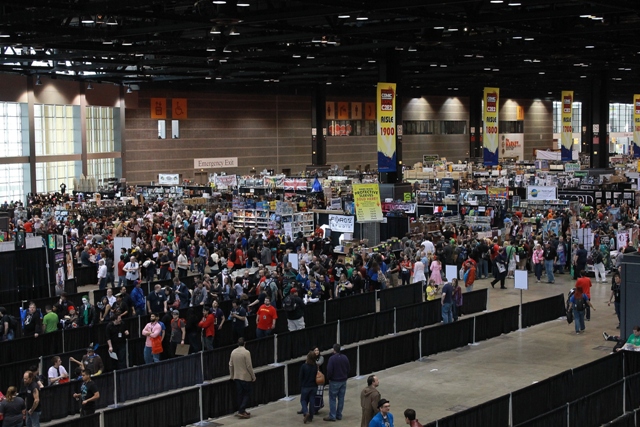 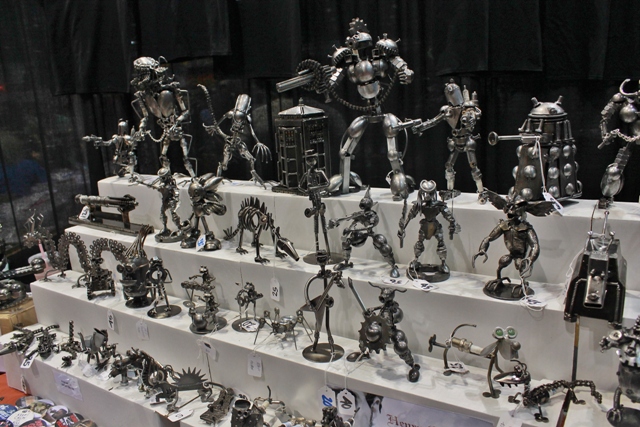 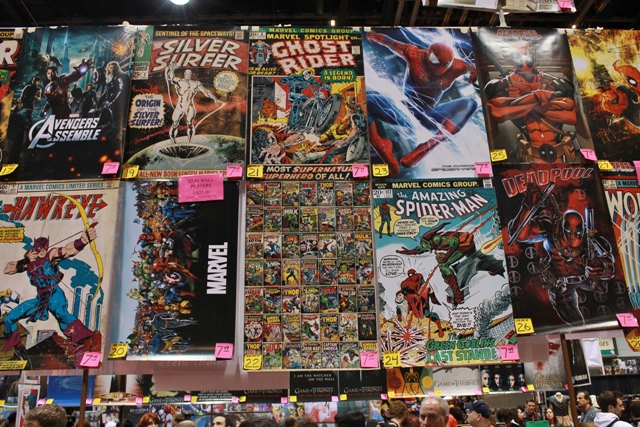 While making my rounds I found the location where Svengoolie would be signing. All the celebrity guests appeared with a specific time table which would ensure things ran smoothly though it would later cause a dilemma for Sven whose line (as always) was longer than time would allow. He would find a solution to the problem (albeit an uncomfortable one) which I’ll discuss in another post. For now the location was barren save for a familiar face hovering nearby. It was PA host, Dr. Destruction’s, former sidekick Deadgar Winters. The last time I saw Deadgar he was still with The Crimson Theater and up by J.J. Blinkers to see Svengoolie…along with just about everyone else in southern Wisconsin. Since that time, the Crimson Theatre went through an entire crew change (something it’s pretty much famous for) and now Deadgar hosts Coffin Classics on Public Access TV while boasting sidekicks of his own. Later Count Gregula joined us as well. 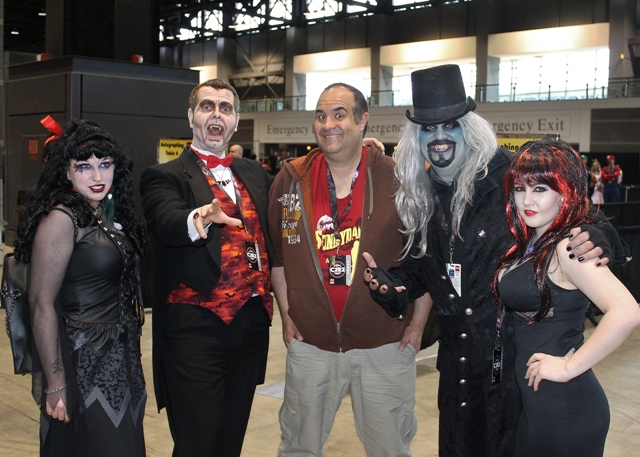 We did some catching up and I met his crew before heading off on my own way again. I was hoping to catch a glimpse of  Chandler Riggs a.k.a. Carl from “The Walking Dead” but the line was huge and they wouldn’t permit you to go off to sides and snap pictures.

I found a vendor who was selling trade paperbacks half price and snagged a copy of “Secret Wars.”  When I was eleven years old, that twelve issue limited series is what got me hooked on comics in the first place. I had already had a paperback version that my children had since coveted (the downside of your kids inheriting your interests) and I was in need of another. This was a newer printing and cheaper than if I’d bought it on Amazon. Who says you can’t find a good deal at an Expo? 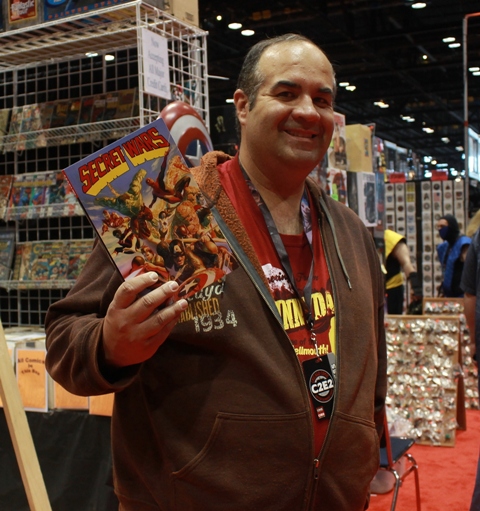 I bumped into my co-worker, Bruce Brooks, and his awesome wife Lisa. In my female dominated/drama filled day job at the hospital, Bruce is a proverbial breath of fresh air. His wife is hilarious and always cracks me up with her Facebook posts. The most recent was when she saw the new Godzilla movie and was so happy with it, she proclaimed the Big G to be her new “baby daddy.” 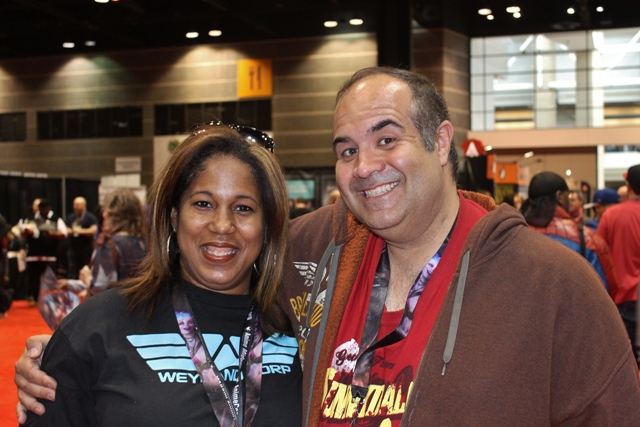 It was at this point when I checked in on the girls (via text) and noticed the time. Svengoolie would be signing soon and I had to get back to his signing area. I was just about there when I saw a team of guys wearing Sven shirts hanging out by the booth reserved for Jerry Lawler. I recognized two of them as Jim Roche and Chris Faulkner. The Svengoolie crew had arrived…