The day after we visited Baltimore, we toured the Maryland Zoo with some pals before crossing the New Jersey state line. New Jersey is one state that seems to find itself the butt of jokes and get a lot of crap from the rest of the Union but I have to say, it’s really quite beautiful (Snookie not withstanding). I remember the first time I drove through was on Labor Day Weekend 2012 en route to see David. Despite being sick of driving and eager to reach my destination, I pulled over twice to take in the scenery. We’d managed to finish seeing the zoo by noon and found ourselves with extra time on our hands. This provided us with the perfect opportunity to do something else we’d discussed but weren’t sure how to fit in.

Both Daves are fans of Kevin Smith movies as well as his AMC reality show, “Comic Book Men.” I should probably mention that neither of us are particularly keen on reality TV in general (we’ve yet to come across any that weren’t blatantly scripted) but, in this case, are willing to make an exception. The show has been described as Pawn Stars for Geeks with folks bringing in their treasures in hopes of scoring some cash. Scripted or not, there’s clearly enough fanboy activity and banter to keep us sufficiently entertained. The setting is a comic book store owned by Smith, appropriately called “Jay & Silent Bob’s Secret Stash.” David and I were convinced that this must be the Mecca of Comic-donia and a spiritual journey we had no choice but to make.

The drive was longer than our daily quota (I’d set this trip up so we’d never have to drive more than two and half hours each day) but the weather was nice and so was the scenery. Eventually we made it to the town of Red Bank, and David’s GPS began to chime. Prior to the trip he’d downloaded a program that would have the device alert us to any weird or interesting attractions along the way. To be honest, it really hadn’t done much of a job until this very moment when it let us know we were getting close to the “Buddy Christ statue.” This was featured in Smith’s film, Dogma – a hilarious & irreverent take on organized religion.

Downtown Red Bank was a plethora of quaint shops and eateries. The streets were lined with cars so we had to find paid parking which took us about half a block from “The Secret Stash” and right across the street from a toy store. In the world of “Toys R Us,” it’s always a pleasure to see a privately owned toy shop and we decided to go in for a look and see what interesting items they had. Aside from that, it had the closest bathroom and one thing that became evident on this road trip…we Daves may be in our ’40s, but our bladders seem to think that number’s a lot higher. After we checked that place out, we walked across the street and on to the “Stash.”

We walked in the door and noticed that set up seemed a bit different than the show. To the right was a register and lots of great stuff but it didn’t resemble the spot we saw them wheeling and dealing with folks on the TV show.

The workers were busy doing what appeared to be inventory with a young guy going through items on a table. Suddenly, a man with a much more familiar face brushed right past us. It was Walt Flanagan, who not only stars on the TV show but has made several appearances in Smith’s films. I tapped David on the shoulder and pointed. We’d both assumed the guys on the show only popped in for filming and had no idea they actually worked there. Some actual reality on reality TV? Who’d of thought?

We’d both brought our cameras so I asked him, “Can we take pictures?”

Great!…can we take pictures with you?”

He turned. “You want to take pictures with me? Yeah, we can do that.” He put down the pen and paper he’d been writing on and summoned the young guy we saw when we first walked in. He was the perfect choice since, after handing him my camera, he told me he owned a Canon SLR too. This was a HUGE relief considering how it’s always a gamble when I hand a stranger my camera that I’m not going to end up out of focus. While we got ready to pose, Flanagan called someone else to join us. It was yet another cast-mate and co-worker, Ming Chen. 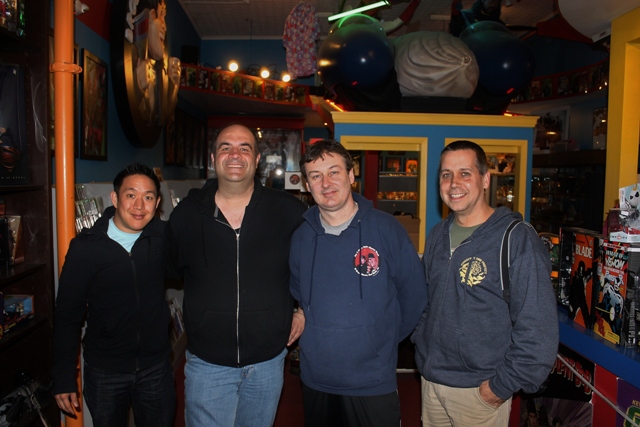 David I looked around and it was definitely a great store and one I have no doubt we’d both frequent had either lived closer. 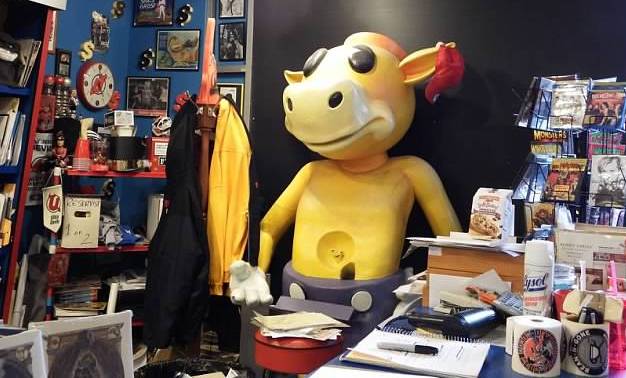 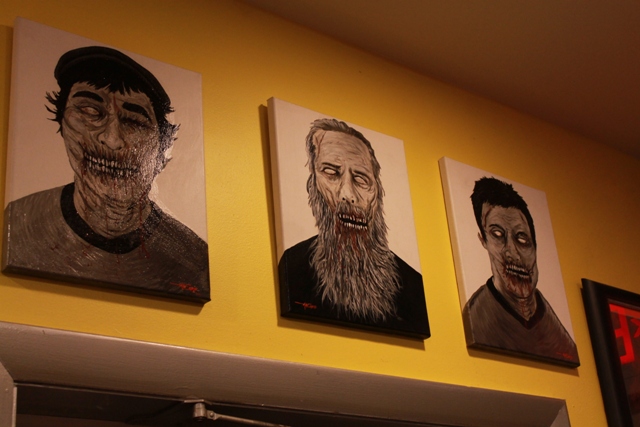 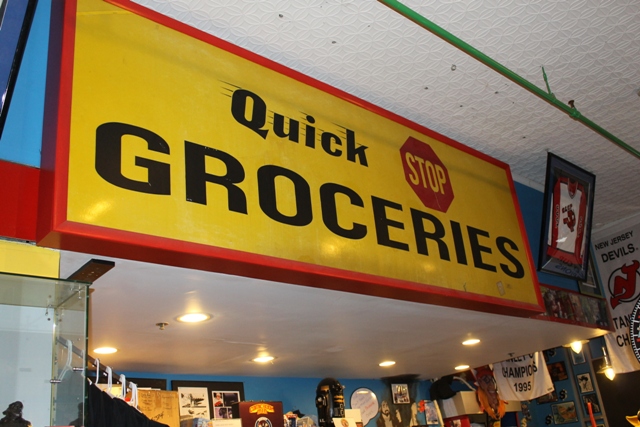 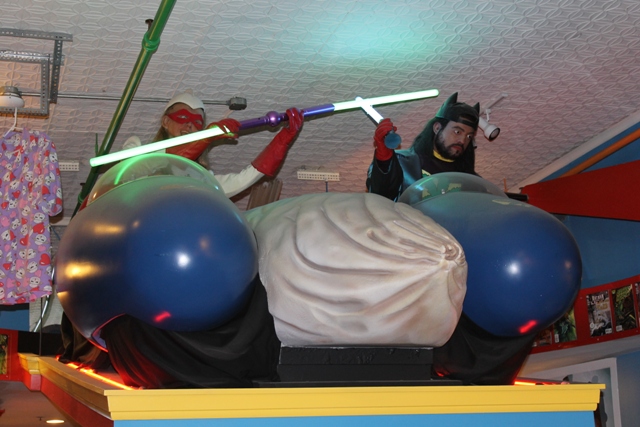 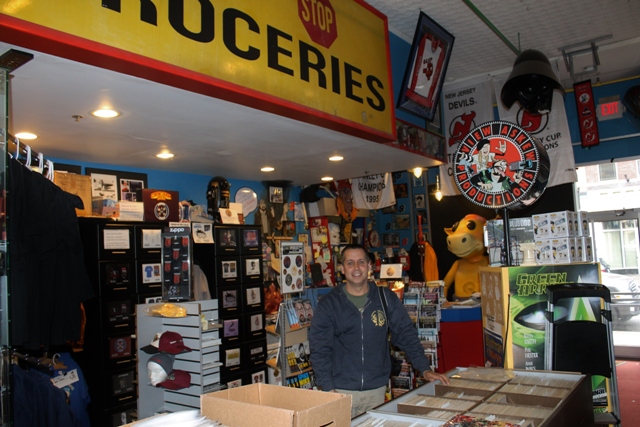 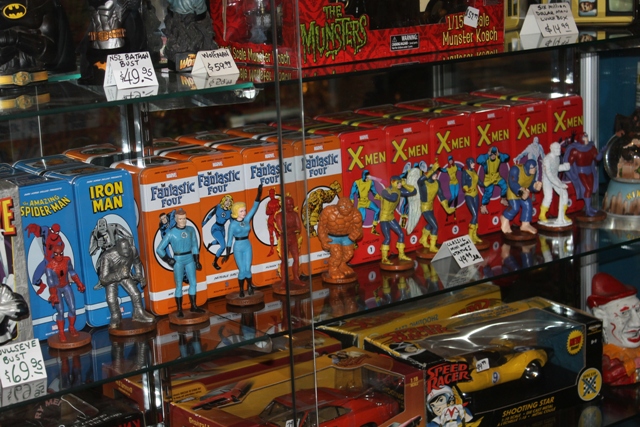 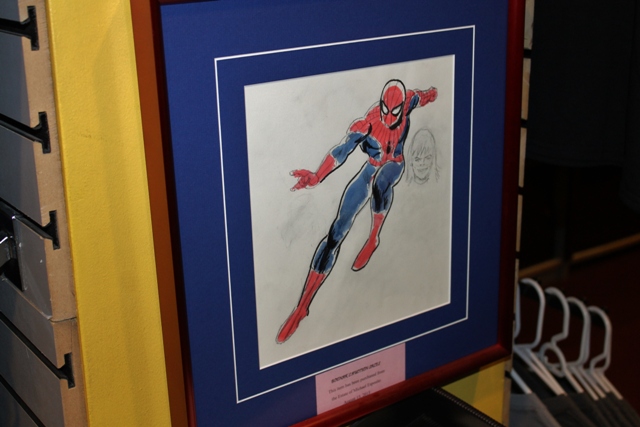 We tracked down a trade paperback of “The Astonishing X-Men” which discussed during the drive. We both love The X-Men as well as the work of Joss Whedon and this collection illustrated the union of both. We asked Flanagan about it and he commented how great it was. You could tell he wasn’t just providing lip-service…this was a REAL Comic Book Man after all. In the end, David opted to purchase a signed blu-ray of the aforementioned Dogma which I can only assume he felt was his divine duty after standing in the presence of The Buddy Christ.

As for me, I went with another God….Godzilla. They did have some of the new GODZILLA toys from the upcoming movie but, while I’m dying to see the film, they can keep the toys! These Godzilla toys are hard plastic with noticeable screws that make him look more like FrankenZilla. Instead I settled on a good old Japanese variety which I picked up for my son, Luke. I was carrying it around when Chen walked past me and said, “Isn’t that an awesome bank?”

“Definitely! It doesn’t even look like a bank!” I said confidently…which wasn’t much of a challenge in lieu of my having no idea it actually was a bank until he’d just pointed it out. Closer inspection revealed a slot over Godzilla’s left shoulder. I casually walked over to David. “Did you know this was a bank?” I whispered. “No,” he laughed.

We went to the check out and Walter popped over to ring us up. Why I found that so amusing I have no idea and quickly handed David my camera so he could capture the moment.

We walked out happy and felt that the excursion was more than worth it. It was also terrific pre-game as the next day we’d go see Captain America: The Winter Soldier together in Belmawr (here’s our Terror Dave Review…it’s FANTASTIC, Go See it!!!).

We were now only a couple days away from New England…and the site of yet another special excursion. One Terror Dave Albaugh will tell you all about it. 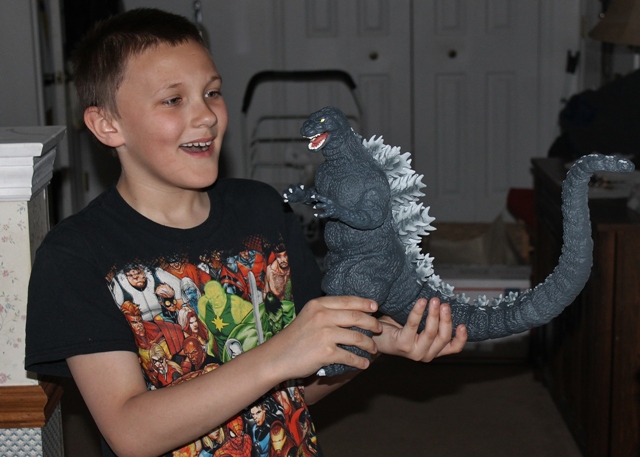