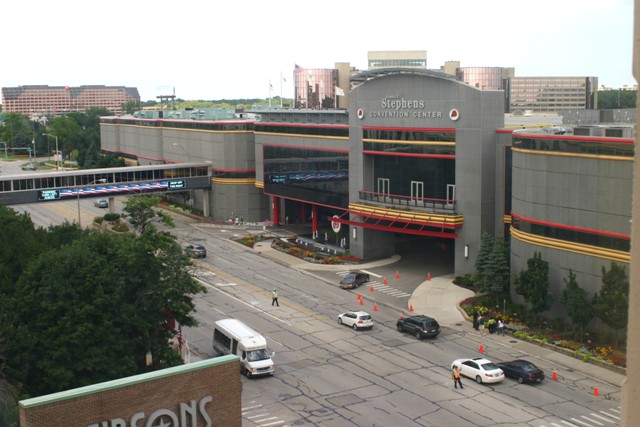 This past weekend, Chicago celebrated it’s annual Wizard Con at the Donald E. Stephen’s Convention Center in Rosemont. This is the Midwestern version of the famous San Diego Comic Con – largest of all fan events.

It’s been a long time since I collected comic books and about 12 years since my last Wizard Con (or whatever they called it back then as it has changed ownership periodically over the years). Upon discovering that THE EXORCIST star, Linda Blair, along with a few alumni from “Buffy the Vampire Slayer” would be in attendance, I decided to give it another shot.

Last July I had attended G-Fest at the same location. Unlike the Godzilla Festival, which boasts about 1300-1500 attendees, Wizard Con utilized the full main floor of the convention center to accomodate it’s 500 celebrity guests (actors, artists, etc) and legions of fans. 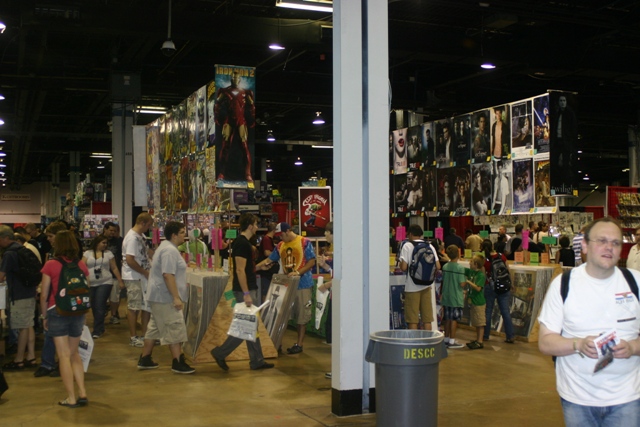 In regards to fan conventions, I can safely say that bigger is not always better. Despite it’s immense size and impressive guest list, Wizard Con offers little to its fans aside from sore legs, hurt feelings, and empty pocket books.

We went on Friday, specifically avoiding the Saturday crowds, arriving a couple hours after the show opened to avoid waiting in line. Since I had prepaid online, we were able to enter the main hall with relative ease.

I walked past the “Buffy” section featuring James Marsters (Spike), Clare Kramer (Glory), and Nicholas Brendan (Xander). It was great seeing them “live” and I was about to enter their autograph lines when I noticed a sign hanging above them which read, “No Pose Photography.” 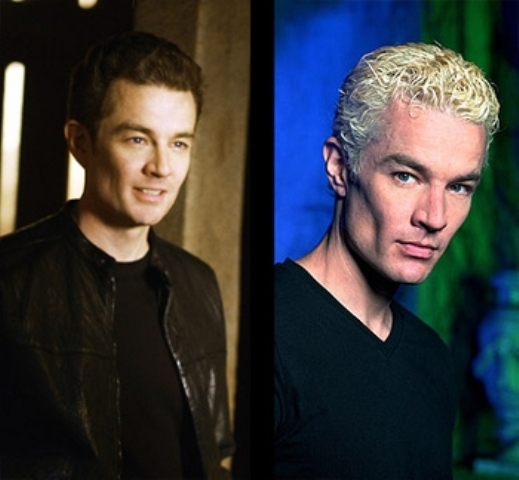 James Marsters: one of three stars from TV’s “Buffy the Vampire Slayer” featured at Wizard Con.

This was a common feature of Wizard Con along with their convention staff/volunteers acting more as gestapo (preventing anyone from getting close to their idols) as opposed to providing assistance to the conventioneers. Most of the celebrities, with a few exceptions, sat like automatons providing minimal interaction with thier fans.

Needless to say, I decided to remove myself from the line. I love “Buffy the Vampire Slayer” and will always consider it to be one of my favorite television programs of all time. If I was meeting Sarah Michelle Gellar, that would have been one thing. However, we’re talking about supporting cast members who haven’t engaged in a whole lot of noteworthy projects since the show’s demise.
While celebrity signatures make great collectibles, I prefer to have a photograph taken with them instead. An old friend of mine once had a room in his apartment covered with framed photos of himself along with members of the rock band KISS, Judas Priest, etc. To me, this was the ultimate trophy room and I could have stared at those walls for hours. At the very least, a genuine moment of me expressing admiration for their work along with a glimmer of appreciation from them (considering the lengths I took to tell them so) would suffice.

With my dreams of getting a photograph with the “Buffy” stars up in a proverbial cloud of “vampire dust,” it was now time to meet Linda Blair. There was no line to meet her and she was readily available. Handling her business transactions was “her neighbor” who was very friendly. Blair had a wide assortment of photos to choose from which could be divided into two main categories; EXORCIST shots and those depicting Blair cuddling with fuzzy puppies (hows that for contrast?). 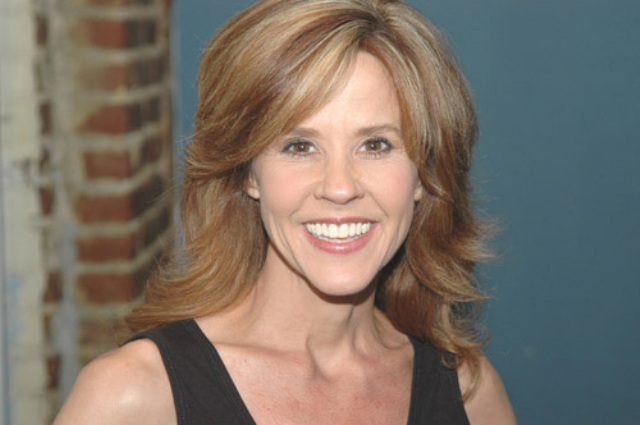 An avid member of PETA, the 51 year old actress has dedicated her life to dog rescue and adoption. She does this via her own “Linda Blair WorldHeart Foundation.”  All the money she charges for her autographs ($25) and/or photo with her ($15) was exclusively donated to her charity. Her dedication to man’s best friend is admirable. In terms of celebrity meetings, however, I’d have to rate Ms Blair a paultry “four” out of ten.

She was not interested in talking about THE EXORCIST, only her foundation. Her appearance at Wizard Con was clearly all business, with little regard for the role that made her famous let alone her devoted fans. I could almost imagine the conversation that took place between Blair and her business manager while going over her foundation’s finances. Manager: “Gee, it looks like we may be going over budget.” Blair: “Oh crap, I guess I’ll have to do a few of those damn fan conventions! Don’t worry, Fido (while stroking a canine’s head) for you I’ll gladly enter the gates of Hell!”

As soon as you got in front of her, she handed you one of her fliers. When she saw me hand it off to my son so it wouldn’t show up in the photo I was taking with her, she looked annoyed and tossed another one at me. Don’t get me wrong, I love animals. But this was a fan event and not a dog show. Furthermore, if I want to support dog rescues, I have a local Humane Society that doesn’t have the benefit of Blair’s celebrity status to bring in much needed funds. 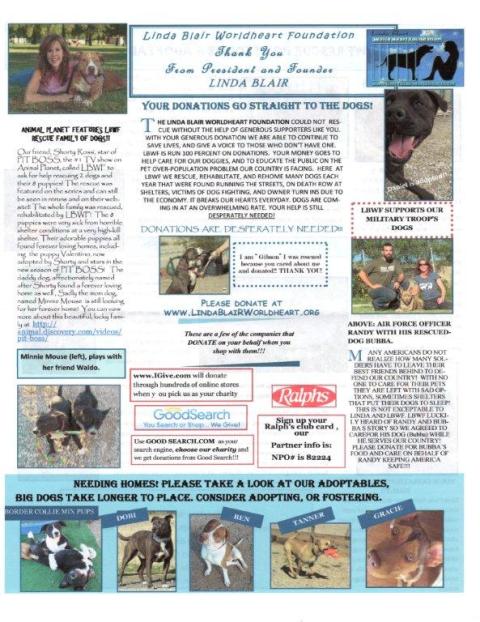 It would be in the best interest of the “WorldHeart Foundation” if Ms Blair took a tip from FRIDAY THE 13TH actress, Adrienne King. By embracing her horror heritage as opposed to shying away from it, Ms King discovered that cozying up to her fan base can be downright lucrative (see earlier post). Here’s an idea Linda, how about selling your own brand of pea soup with a shot of you possessed on the label? You’d please your fans by offering a hilarious collectible while, at the same time, make plenty of cash for your four-legged pals. 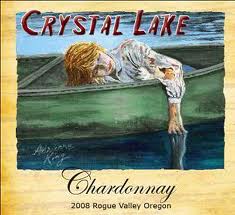 Label from one of Adrienne King’s “Crystal Lake” wines

The one thing I will give Blair is that she was willing to personalize my autograph exactly as I specified.  The photo I had taken with her ended up a bit too bright but this lovely collectible prevented the entire experience from literally going to the dogs! 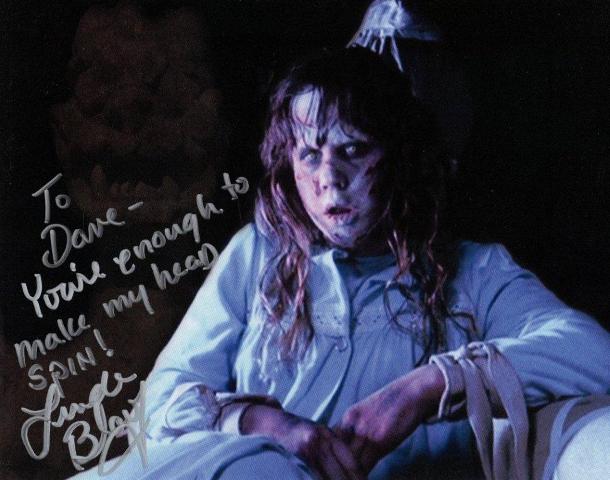 I’m sure some people had better experiences than I had meeting with their respective celebrities. I’m not a Trekkie nor a Batman fan so I have no idea how they were treated. I saw that Illinois public access host,  Count Sam Gregula, had a bit more luck thanks to his persistence and press pass. I’m hoping he’ll share his experience with this blog so perhaps readers can get a more rounded view. I did notice that TERMINATOR star, Linda Hamilton, was very ingratiating towards her fans and seemed genuinely pleased to meet them. During the numerous times I walked past her booth, I observed her joking around and happily posing for pictures.  It’s nice to know that a few celebrities remembered the reason they were asked to attend this event in the first place. Ultimately, however, I hold Wizard Con responsible for allowing them free reign.

I noticed the following day that former Illinois Governor, Rod Blagojevich, made an unscheduled appearance.  It is my understanding that, for a price,  he would pose for photos and sign autographs. The press treated it as a groundbreaking story though I exhibited no surprise. As far as I was concerned, the disgraced “pay to play” Governor had certainly come to the right place.